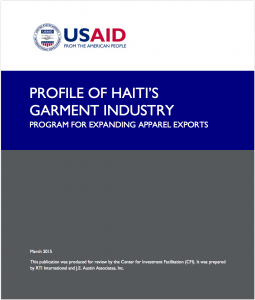 Though the Haitian garment industry has relatively few manufacturers, it exports a disproportionate value of products to the U.S. It is also developing a service industry that includes production of hangers, polybags, sewing threads, and cardboard boxes. Further, value-added services are being introduced, such as embroidery and quality auditing for buyers.

Still, the industry has a number of weaknesses. A lack of Haitian middle management necessitates the use of expensive expatriates. Long fabric sourcing lead times, an unreliable energy supply, and some outdated labor laws also constrain the industry.

Haiti’s apparel industry is at a crossroads. Without considerable investment in infrastructure, including energy production facilities, water and effluent plants, and serviced industrial factory shells, the industry’s ability to attract additional investment is severely limited. As production costs rise across Asia, particularly China, retailers are looking for new locations to source production. Africa is increasingly seen as the next major region for manufacturing. It is thus urgent that Haiti’s government find sources of funding for infrastructure development as a first step to holistic reforms.

Attracting additional investment to Haiti’s garment industry should include a targeted approach toward specific types of investors. Specifically, targeted investors should be full package manufacturers that are geared toward higher U.S. tariff categories, and ideally offer value-adding services. In order to attract this type of investment, the Centre for Facilitation of Investments (CFI) should have an employee who is well versed in the industry’s value chain, assets, and needs.

There are a number of potential sources for new investment. In addition to Korea, CFI should pursue investors from China and Taiwan. It should particularly target companies that already have a manufacturing base in Africa, where operating conditions are similar to Haiti. Similarly, foreign companieswithoperationsinMauritiusandMadagascar1 shouldalsobeconsidered.

This report includes a number of recommendations for the government of Haiti and CFI to attract additional investment and support existing manufacturers. No single recommended action will sufficiently support the industry’s growth. Rather, the recommendations should be viewed as part of a holistic approach to capitalize on the industry’s strengths and opportunities while addressing its weaknesses.